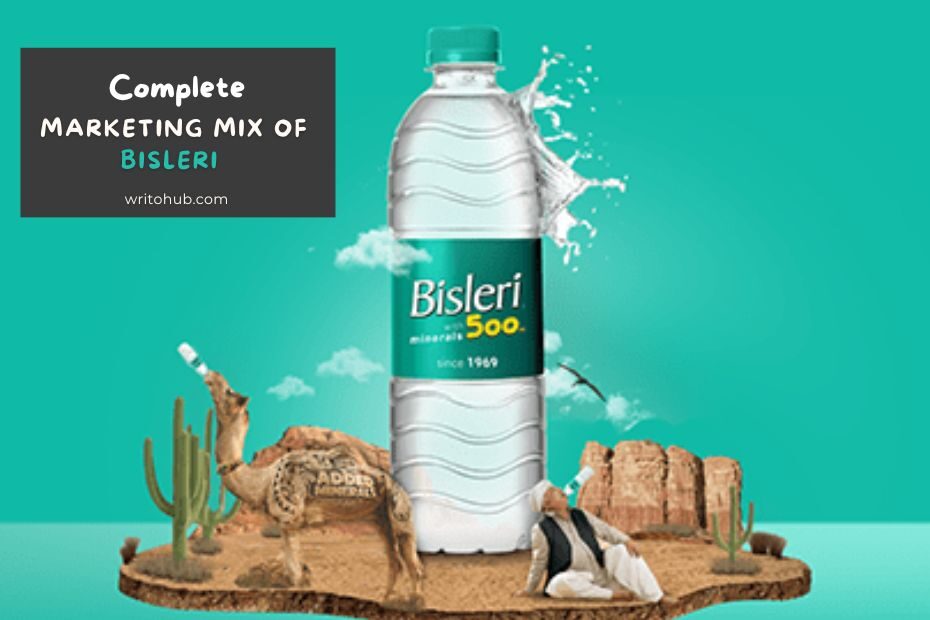 The Marketing Mix of Bisleri tells the 4ps (Product, Price, Place, and Promotion) of the famous Indian drink company – Bisleri!

Bisleri is a public limited corporation that specializes in bottled water and was founded in 1965 by an Italian named “Signor Felice.”

It is one of the market’s major manufacturers, with about 36% of the market share. Bisleri bottles are widely available in India, because of the brand’s impressive expansion, which includes thirteen franchises and eighteen production units around the nation.

Let’s start with the Marketing Mix of Bisleri to learn more about their product, price, promotion, and distribution approaches.

Product in the Marketing Mix of Bisleri

The main item in the brand’s product portfolio is mineral water, which is marketed as “Bisleri Mineral water.” Aside from that, Bisleri Sodawater is a brand of soda water produced by the company. There are two types of soda water available: non-carbonated and carbonated.

Bisleri’s product was initially sold in glass bottles with the Bisleri brand name inscribed on them. Later, the firm converted to non-returnable PVC bottles, and today the bottles are offered in pet containers that customers may take home.

The company has produced product varieties to fulfill the varying wants of consumers, allowing it to reach different segments of society. Bisleri bottles come in a variety of sizes, including half a liter, one liter, five liters, two liters, one and a half liters, 250 milliliters, and twenty liters.

Because the notion of bottling mineral water was Bisleri’s first venture into India, the brand has become associated with mineral water drinkers in India. The brand’s biggest difficulty is that there is limited room for innovation in this product, therefore it comes up with a variety of alternative strategies to combat it.

Place in the Marketing Mix of Bisleri

Bisleri’s mission is to provide people with safe, affordable drinking water. In line with the company’s mission, Bisleri’s prices are equivalent to those of its direct competition – Kinley, Bailey, and Aquafina.

Furthermore, its marketing mix price is based on package volume, with lower rates for greater volume packs. The items have different prices depending on where they are offered.

Because of its robust network of absolute distribution strength, Bisleri is one of the industry’s front-runners today. The corporation has opted to expand its distribution channels in the southern area to penetrate more deeply.

Eighteen of the company’s production factories have been established around the country. It has bottling factories in Bangalore, Mumbai, Jaipur, Delhi, Kolkata, and other locations.

Price in the Marketing Mix of Bisleri

The brand understands that the main goal is to produce as much sales volume as possible since this would immediately result in higher profits. It will not reach every area of society until and unless consumers can acquire the product in a convenient location and at a reasonable price.

Bisleri has maintained pricing practices basic and straightforward to satisfy consumer expectations. Because all of its rivals were selling their items in the same price range, it recently boosted its rates to a minimal rise under its competitive and reasonable pricing strategy.

Because the majority of people in India are from the middle class, the company has adopted a moderate price strategy. Water is readily available everywhere, and to sell and advertise it, one must maintain the price policy as low as possible.

Promotion in the Marketing Mix of Bisleri

Bisleri’s marketing strategy is extensive, encompassing personal selling, targeted advertising in a variety of media, public relations, and sale promotion. To improve brand awareness, it is made widespread, appearing on hoardings, vehicles such as trucks and taxis, billboards, and posters in retail locations.

A solid product goes a long way toward propelling a company ahead, but without adequate consumer-brand communication, even the best product will fail to rescue the firm.

Bisleri understands this notion and has resorted to persuasion tactics to raise its awareness in the consumer market.

All of its commercials are broadcast on the radio and television. The company’s tagline, “Pure and Safe,” has proven quite popular among customers. Bisleri chose “sealed top bottles” as a way to set itself apart from the competition.

Because it was impossible to refill the container without interfering with the seal, it proved to be a huge coup for the brand, which guaranteed 100 percent purity.

The first Bisleri advertisement appeared in print media, with the punchline “Biasleri is veri veri extraordinari.” Bisleri offers a comprehensive website that includes all brand-related information, product offerings, and contact information. As a result, Bisleri’s marketing mix is complete.