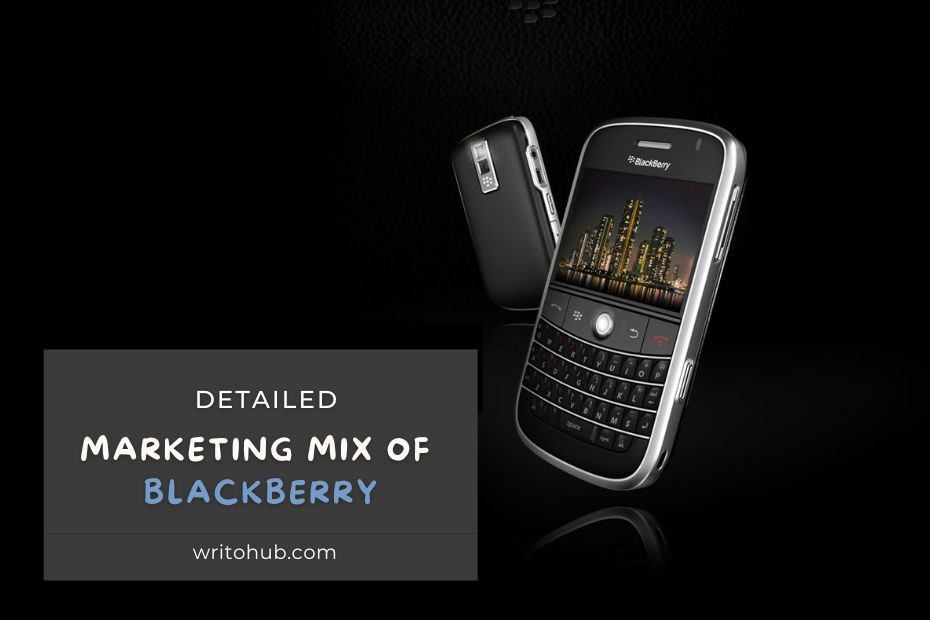 The Marketing Mix of Blackberry tells the 4ps (Product, Price, Place, and Promotion) of the Top Canadian software company – Blackberry!

BlackBerry Limited is a global wireless equipment and telecommunications corporation headquartered in Canada. The business is primarily known for developing the BlackBerry exquisite line of tablets and smartphones.

The corporation has a strong presence in the fields of software development for industrial applications, mobile device management, and wireless telecommunications equipment manufacturing.

The corporation is headquartered in Waterloo, Ontario, Canada. Douglas Foreign and Mike Lazaridis launched the firm in 1984. The firm was dominating the American market, but as time passed and other companies entered the market, the corporation lost a significant number of its target clients.

Let’s start with the Marketing Mix of BlackBerry to learn more about its product, price, promotion, and distribution approaches.

Product in The Marketing Mix of Blackberry

BlackBerry Smartphones are the company’s most well-known product. The device gained popularity as a result of its superb ’email on the go’ capability, which is unmatched by other rivals’ products.

Though there have been other versions, the BlackBerry Classic and BlackBerry Leap are two of their most popular Smartphone models.

BlackBerry 10 is a proprietary operating system for BlackBerry smartphones, while BlackBerry Playbook is a small tablet.

On enterprise networks, the software and its services connect to collaboration and messaging applications.

Price in The Marketing Mix of Blackberry

BlackBerry Smartphones become extremely popular owing to their ability to access e-mail on the go. The business planned on concentrating on enterprise sales and allowing corporations to instill the brand in their workers.

BlackBerry made its devices accessible to middle-class professionals to grab the market. At the outset, the brand’s high prices inhibited its rapid expansion.

However, they later carefully put phones in a variety of pricing ranges, starting at Rs.4, 410 and rising to Rs.53, 200, with various qualities to fit various demands, allowing them to reach a larger target audience. Some of its models are offered for cheap on Indian e-commerce sites.

Some of its early models may be found on e-commerce sites for very cheap.

Place in The Marketing Mix of Blackberry

North America, Mexico, Thailand, Indonesia, and the United Arab Emirates all have Blackberry shops. A Blackberry store opened in Michigan, USA, in 2007.

There are blackberry stores in airports around the United States, including Atlanta, Boston, Newark, and Houston, to mention a few, and the majority of them will close shortly. The firm debuted its first pop-up store in Germany in 2015.

Until 2013, BlackBerry had 85 million global subscribers. However, due to the success of the Android and iOS platforms, it has lost a significant portion of its user base. It now has just 23 million members throughout the world.

Promotion in The Marketing Mix of Blackberry

Blackberry is making every effort to reclaim territory that has been lost. For one thing, it is concentrating on its Smartphone division to reclaim much of its former glory.

The company’s current strategy is to concentrate on commercial customers. With unique features like consolidated messaging and notice of new messages with a flashing red light, smartphones like the BlackBerry 10 are ideal for corporate communication.

Professionals in the healthcare business are the target market for their new Passport smartphones. The corporation is promoting Blackberry Smartphones as the ideal phone for industries such as healthcare, insurance, and banking by emphasizing their strong security features.