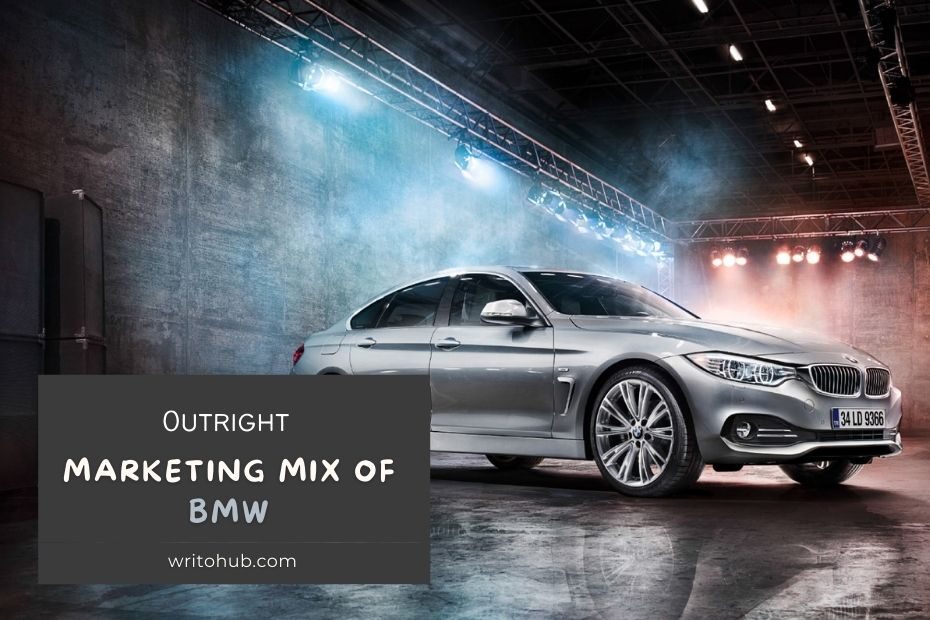 The Marketing Mix of BMW tells the 4ps (Product, Price, Place, and Promotion) of the German multinational corporate manufacturer of luxury vehicles and motorcycles – BMW!

BMW is a German automobile and motorbike manufacturer that is also one of the world’s most recognizable and admired brands. BMW is one of the ‘big three’ German luxury automobile manufacturers (the other two being Mercedes and Audi).

The company has strong global consumer demand for its vehicles, and having a BMW parked in your yard has become a status symbol in many places.

The company competes in prestigious competitions such as Formula One, motorcycle racing, touring cars, and rally vehicles.

The company began manufacturing aircraft engines during World War I, but was forced to close following the Armistice Treaty of Versailles. As a result, the company was obliged to focus only on passenger vehicles.

Let’s start with the Marketing Mix of BMW to learn more about its product, price, promotion, and distribution approaches.

Product in The Marketing Mix of BMW

The BMW Group is primarily focused on producing high-end two- and four-wheel vehicles for global markets. These vehicles are made in a variety of locations across the world, depending on the demands of each segment. Some vehicles provide customers with a high level of customization, whereas the bulk of products are uniform throughout countries.

BMW’s four-wheeler vehicles have long been identified with the luxury and high-end product segments. The company has made a concerted effort to be seen as “Premium” by its customers.

To remain competitive in the market, the vehicles go through a continual process of technological advancement. Previously, the company’s distinguishing characteristics were luxury and style. However, the importance of reliability, safety, and efficiency in BMW’s product strategy has been clear in the company’s product offerings over time.

The BMW Group has been a great proponent of engineering and technological advancements, and most of its products reflect this. For specific areas, the corporation also has a motorbike and bicycle manufacturing operation. These products are sometimes referred to as ‘niche’ procurement planning.

Overall, the company places a premium on the safety and elegance of its products. In addition, new and innovative vehicles are launched at regular intervals to meet the changing demands of customers. BMW has just joined the electric and hybrid car market with the release of the BMW i8, a new model.

Price in The Marketing Mix of BMW

The BMW Group has long been a premium participant in the market, specializing in high-end luxury vehicles that are seen as status symbols.  When compared to its competitors in the category, all of the vehicles are priced ‘premium.’

BMW-affiliated brands such as Mini Cooper and Rolls-Royce follow the company’s price strategy. These brands are a little more expensive than the typical BMW product line.

BMW establishes a luxury pricing structure to place itself in the “Desirable” market segment. This price approach in its marketing mix also ensures that the brand is not diluted or that its positioning is not ambiguous.

The price of BMW spare parts and after-sales service fees is a continuance of this marketing approach. They’re also a little more expensive than comparable contemporary brands.

BMW has used a dynamic pricing strategy for its entry-level vehicles in developing regions (India, Brazil), where it can provide a competitive price for its smaller models.

BMW’s new 3-Series automobiles are available for a starting price of 25 lacs INR. This is a profitable figure that allows purchasers to fantasize about having a premium automobile.

Aside from that, BMW has taken a step further to boost sales by offering financial services to its customers.

Place in The Marketing Mix of BMW

BMW, being a globally known automobile manufacturer, has expanded its production operations to several places. Munich, Bavaria, was the site of the first facility.

However, as the company has gained new customers throughout the world, it has now established massive production facilities to handle such large volumes.

Apart from production, BMW’s marketing mix-place strategy extends to company dealerships and even other luxury automobile sellers throughout the world.

BMW has recently established production plants in several smaller and growing regions. This has also aided the corporation in expanding its market into several smaller nations.

For the selling of its vehicles, BMW has a dealer network. Because appointing a distributor is more expensive and the margins for showrooms are lower, BMW does not utilize vehicle distributors and instead directly appoints showroom dealers.

As a result, BMW has authorized showrooms where automobiles are sold to clients. BMW has distributors and retailers in important places for spare parts distribution. BMW dealerships can be found in the most affluent areas of metropolitan areas.

Even in a city like Mumbai, you’ll barely find 3-4 BMW stores, if that. Because if BMW distributes vehicles too aggressively, it will lose some of its brand image.

Promotion in The Marketing Mix of BMW

For more than half a century, BMW has been a globally recognized brand. The corporation has been quite vocal about its products and other services. As part of its marketing mix, the promotional strategy relies on aggressive advertising through media channels such as television, internet commercials, billboards, and print ads to maintain brand recognition.

BMW has been a strong supporter of many rally racing and sporting events. The company also sponsors several well-known sports teams and rally racers. BMW has long been a regular competitor in many international rally competitions.

In multiple instances, they have been a victorious team in Formula One races.

Aside from Formula One, BMW has also been a prominent contender in Superbike racing. The company has been actively involved in numerous racing events since it began manufacturing motorcycles in 1923. Aside from participating, the company has been a significant organizer of such events throughout the world.

BMW has become known as a speedy and dependable vehicle as a result of these events.

BMW has also found an excellent approach to reach out to additional markets, due to the massive fan following of such racing events throughout the world. Apart from these partnerships, BMW has devised a novel promotional strategy.

Every year, BMW’s ‘April Fools’ pranks have been highly received across the world, making it another significant marketing promotion event for BMW.

I hope you have gathered all the required information about the Marketing Mix of BMW and the 4 P’s of BMW. Stay tuned for more Marketing Mix Articles.