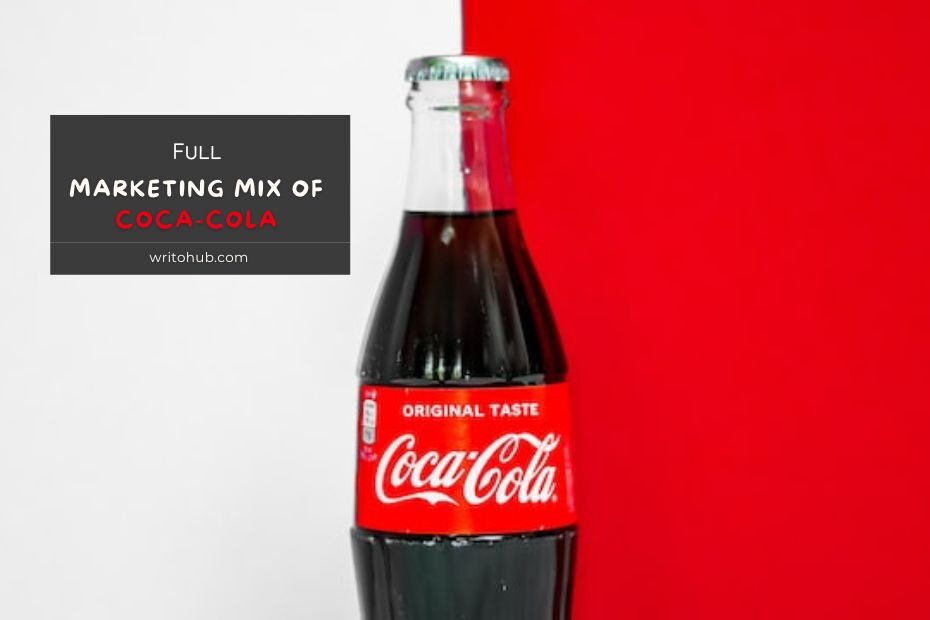 Coca-Cola is the most valuable brand in the world. It has undoubtedly gone through the ups and downs of the corporate world to arrive at that point.

A strong internet presence is essential for leading organizations, and it is one of the reasons why Coca-Cola invests so heavily in marketing – marketing has been the key to the company’s success.

The Coca-Cola Company is a global beverage firm based in the United States that gained worldwide recognition shortly after its founding in 1892. While the firm now provides a wide range of beverages and has significantly increased its product line over the years, its brand is still strongly associated with its original cola drink.

Let’s start with the Marketing Mix of Coca Cola to learn more about its product, price, promotion, and distribution approaches.

Product in the Marketing mix of Coca cola

Coca-Cola beverages are available in a range of quantities and packaging. Coca-Cola, for example, comes in 200ml, 500ml, 1ltr, 1.5ltr, and 2ltr bottles, as well as cans, glass, and plastic bottles.

The Coca-Cola logo is clearly featured on each of these bottles and cans to distinguish it from Coke.

Coca-Cola bottles also have distinctive forms that are associated with the brand. Coca-Cola also clearly distinguishes between classic, diet, light, and zero-sugar choices under its trademark brand so that buyers can quickly recognize the drink.

Coca-Cola, Sprite, and Fanta all have sizable market shares in their respective categories, but their growth has slowed significantly. As a result, they generate a lot of revenue for the company.

Price in the Marketing mix of Coca cola

This means that prices are getting charged for products in various segments. With a limited number of vendors and a high number of buyers, the beverage industry has been termed an oligopoly. As a result, Coke products in similar niches are priced similarly to Pepsi products.

Customers may switch if Coke prices its products excessively expensive in comparison to Pepsi in a given category, especially in developing nations where consumers are price sensitive.

As a result, both parties agree to preserve price parity in each area. Coca-Cola, on the other hand, gives savings on bulk purchases by combining products.

Place in the Marketing mix of Coca cola

The Coca-Cola business manufactures the beverage using a secret formula and distributes it to bottlers across the world. The firm specifies the bottle shapes and sizes. After that, the bottlers fill the bottles with the proper beverage and dispatch them to the carrying and forwarding agencies.

The bottles are then carried by road to stockists, distributors, and eventually shops, where the products are sold to the end consumers.

Most of the time, the items from the distributor are transferred to wholesalers, who then distribute them to retailers regularly based on demand.

Coca-Cola has a large distribution network, and its products can be found in nearly all retail shops and supermarkets across the world.

Do You Know– Coca-Cola products are sold at 2.5 million stores in India.

Promotions in the Marketing mix of Coca cola

Coca-Cola is the gold standard in terms of advertising and branding. Coca-Cola’s marketing strategy relies on aggressive marketing through ad campaigns employing media such as television, online commercials, print media, sponsorships, and so on.

Coca-Cola also airs commercials on television in a variety of national languages throughout the world. Coca-Cola started the “Taste the Feeling” campaign in India in March 2016, with the goal of reminding people of the joy and happiness that Coke delivers to their life.

This was picked for his ability to connect with Indian youngsters. The commercials were broadcast regularly on a variety of stations.

Coca-Cola has evolved into a mass-market product that is supposed to be accessible at any time, anywhere. Coca-Cola will be able to expand its business while still maintaining its stability as a result of this.

Distributors and retailers receive special incentives for promoting Coke goods. These stores are also provided refrigerators and Coca-Cola billboards to promote the brand.

In supermarkets, shelf space is given considerable attention to increasing product exposure. Coca-Cola also participates in a variety of CSR initiatives to promote environmental and social challenges across the world. As a result, all of these aspects provide a general picture of the Coca-Cola marketing mix.

I hope you have collected all the required information about the Marketing Mix of Coca Cola and the 4 P’s of Coca-Cola. Stay tuned for more Marketing Mix Articles.