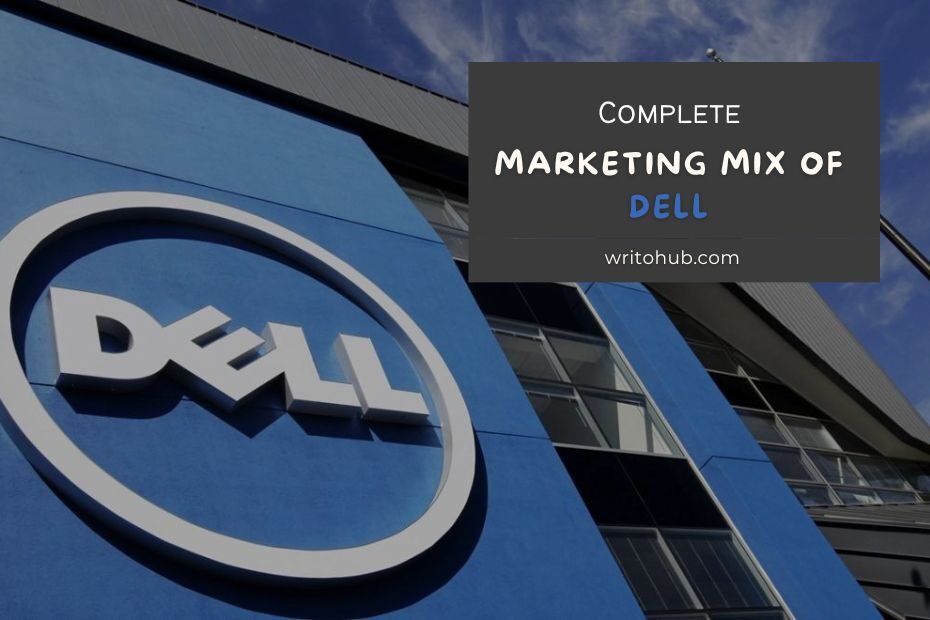 The Marketing Mix of Dell tells the 4ps (Product, Price, Place, and Promotion) of the Great American Technology Company – DELL!

Computers and technology are the focus of Dell. It is among the biggest technology companies in the world.

It is the world’s third-largest PC vendor after HP and Lenovo.

Michael founded Dell, the American computer technology business, which has its headquarters in Round Rock, Texas. Dell offers a variety of products for sale, including desktops, laptops and all-in-one computers, 2-in-1 PCs, gaming PCs, monitors, speakers, projectors, storage media, and other computer accessories.

In addition to a wide range of other products, it also sells workstations, servers, storage, networking, monitors, and other electronic devices.

Dell was well recognized for offering computers and laptops that were customized to meet the needs and specifications of its customers utilizing its built-to-order and configure-to-order strategies.

Let’s start with the Marketing Mix of Dell to learn more about its product, price, promotion, and distribution approaches.

Product in The Marketing Mix of Dell

Dell is renowned for its ongoing innovation and for offering its clients high-quality laptops, PCs, and accessories. Dell’s product portfolio comprises both commercial and consumer goods in its marketing strategy. Its product line includes monitors, gadgets, accessories, desktops, all-in-ones, gaming, XPS, and 2-in-1 laptops.

For business, it has created the Vostro line of laptops for small businesses, the Latitude series, which offers a scalable and durable design, the Dell Precision mobile workstation with ISV certification, and the Chrome book with Chrome OS powered by laptop. Its XPS and Alienware series are more expensive and are targeted at those who want high-end hardware with luxury materials.

Dell introduced Dell Connect, an online remote troubleshooting service that enables technicians to access users’ computers and fix system issues. Users’ top concern is after-sales service, therefore Dell Connect helped the business draw in new clients. One of the first IT businesses to implement a global recycling program for IT hardware and computer accessories was Dell.

Price in The Marketing Mix of Dell

According to the target customer segment, which includes both consumers and businesses, Dell’s pricing strategy in its marketing mix has established various sets of prices. The operating system version and the hardware options affect pricing as well.

Since customers desire to customize their laptops to meet their needs, the customization option has assisted Dell in growing its market share. Dell set itself apart from its competitors by letting customers choose the hardware setup of their laptops.

Additionally, it offered a variety of bundling deals that included extended warranties and accessories for customers.

Place in The Marketing Mix of Dell

Dell sells its products on its website, as well as on e-commerce platforms including Amazon, Flipkart, and Snapdeal, as well as in physical stores. Dell includes storefronts and shops in its marketing mix in addition to the internet. Around the world, there are several showrooms, dealers, and distributor stores.

Early in the 1990s, Dell started selling its products online in the United States on websites for Sam’s Club, Costco, and Best Buy.

Dell established kiosk facilities in the USA so that buyers could touch and feel a product before buying it, but eventually decided to switch to selling through retail stores. It entered into a contract with Officeworks, which featured Inspiron desktops.

Major cities throughout the world have Dell storefronts where customers may browse the merchandise and make purchases. The majority of significant consumer electronics retailers, their websites, and e-commerce platforms all carry Dell products.

Promotion in The Marketing Mix of Dell

Through publications, such as Star In-Tech in Malaysia, which is one of the most important topics among IT customers and tech enthusiasts, it distributes brochures to the general public.

As a result of its cost-effective mass public outreach, its product awareness was raised. In addition to offering seasonal discounts, it regularly runs promotions to draw in customers and runs online competitions.

Additionally, it distributes newsletters to people who have registered with Dell and includes the most recent details about its products and innovations to stimulate customers’ interest. They also provide gifts and exclude some purchases from shipping fees.

Dell advertised that users could customize their goods with the tagline “Yours is here.” In addition, Dell organized conferences, such as Dell World, where it showcased its newest products and services.

I hope you have gathered all the required information about the Marketing Mix of Dell and the 4 P’s of Dell. Stay tuned for more Marketing Mix Articles.