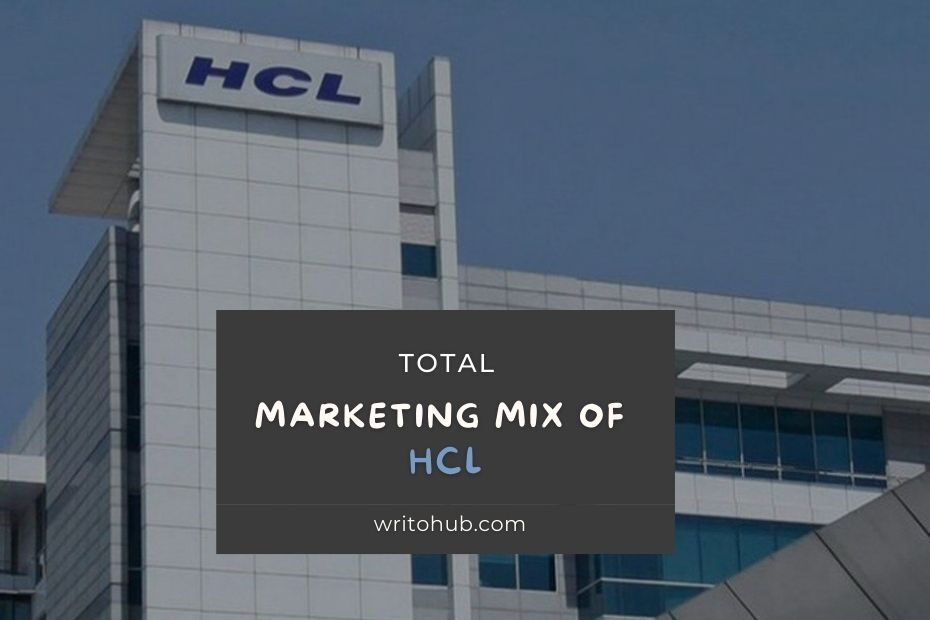 HCL Enterprises was founded in 1976 by six engineers who collaborated on the concept. Shiv Nadar was their leader. Their primary goal was to create personal computers.

Noida is where the company’s headquarters are located. Micro Comp Limited was the company’s original name, and it was eventually changed to HCL (Hindustan Computer Limited).

HCL is a worldwide corporation with around 45 subsidiaries. They’ve formed strategic partnerships with several major international IT businesses, including IBM, and they’ve also worked with Dell to boost their distribution channels.

Let’s start with the Marketing Mix of HCL to learn more about its product, price, promotion, and distribution approaches.

Product in the Marketing Mix of HCL

HCL Technologies is a big IT business established in India that serves clients all over the world. HCL’s marketing mix portfolio includes a diverse range of business lines, products, and services.

Desktops, laptops, portable workstations, and tablets are also manufactured and sold by HCL.

Price in The Marketing Mix of HCL

HCL has a management information framework in place that collects rival product prices and then creates its pricing policies that are similar to the competitors’ prices after careful analysis.

HCL’s major goal is to deliver services rather than generate profits, hence most of its goods and services are priced reasonably.

It is content to earn the smallest profit margins possible to acquire a competitive advantage over its competitors. HCL is a big believer in expanding its network to every nook and cranny of the globe to increase volume.

Because the corporation recognizes that larger volume sales will follow naturally, it has maintained consumer-friendly pricing strategies to maximize wealth rather than profit. It has been introducing new items to the market that are low-cost and appear to be cheap to customers.

The company has not sacrificed the quality of its products to save money, and as a result, it has been able to fulfill customer pricing demands.

Place in The Marketing Mix of HCL

HCL has an international presence and serves at least 35 nations throughout the world. Brazil, Sweden, Denmark, Belgium, Singapore, China, India, Australia, Malaysia, the Netherlands, and Germany are among its offices.

HCL has made significant progress in its production and distribution practices because of advancements in logistics and infrastructure. The firm has invested in SSOs (Support Service Organizations), PSOs (Professional Services Organizations), and manufacturing units in Pondicherry and Noida in India.

HCL has been able to give full solutions and increase production quantities to international standards with the aid of both SSO and PSO. This has improved the company’s ability to provide a wide range of installation types, from big to single orders for several sites.

The SSO has a direct support staff of 800 personnel and operates in 150 sites around the country, making it one of the country’s largest teams in the IT business.

The frontline division of HCL, which is in charge of computer system marketing in the country, is another important part of the company’s strategy. HCL has a large network section with at least 300 cities and 800 resellers trying to promote and spread PCs in various areas such as homes, workplaces, and schools. HCL has even established a “Call center consultancy” team to assist potential clients in gathering information.

Promotion in The Marketing Mix of HCL

HCL places a high value on its marketing and promotional efforts. Television and the internet are the company’s preferred forms of advertising, while the brand can also be seen in magazines and newspapers. The company has launched a multi-media campaign to raise customer knowledge of the different products and services it offers.

To promote the goods and the brand name, HCL has engaged Indian actor “Nargis Fakhri” as its brand ambassador. HCL formed an unusual relationship with Intel and Microsoft to change the notion of “Indian Digital Entertainment.” APPLE has also partnered with the brand to provide services and sales support for IPODS throughout the nation.

HCL gives unique deals to business houses, institutions, and end-users as part of the company’s sales promotion programs. It has also launched several initiatives under which select HCL products may be purchased on an EMI basis. It has become a member of the “Go Green” movement. HCL has created a GreenEdge architecture to address the demands and desires of the industrial industry.

I hope you have gathered all the essential information about the Marketing Mix of HCL and the 4 P’s of HCL. Stay tuned for more Marketing Mix Articles.