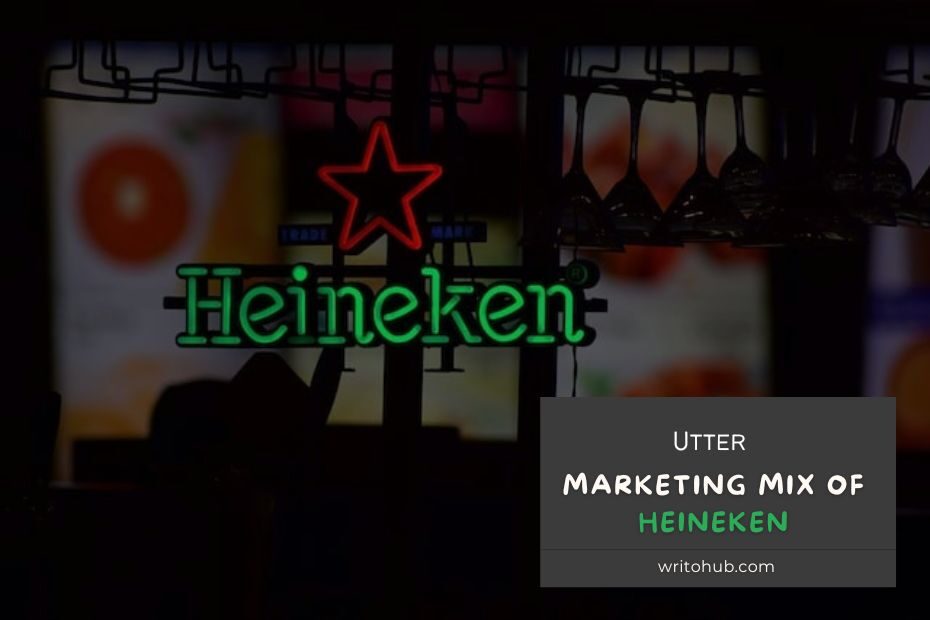 The Marketing Mix of Heineken tells the 4ps (Product, Price, Place, and Promotion) of the leading beer brand produced by the Dutch brewing company – Heineken!

Heineken is a global brand with Dutch origins. It is related to the beverage business and is owned, manufactured, and promoted by Heineken International, its parent company. The company’s headquarters are in Amsterdam, the Netherlands.

It is easily identified by the red color star on the trademark green color bottle. Gerard Adriaan Heineken, the company’s founder, first offered Heineken beer to the public in 1873. It now ranks third in Europe as the largest beer maker.

Let’s start with the Marketing Mix of Heineken to learn more about its product, price, promotion, and distribution approaches.

Product in Marketing Mix Of Heineken

Heineken brews and markets premium, specialty, local, and regional beer and cider. It is a pale lager beer with a 5.4 percent alcohol concentration. Heineken’s original formula is said to be unchanged since it was originally made.

The firm owns roughly one hundred and sixty-five breweries and, in addition to its major products, Heineken Lager Beer and Heineken Light Lager Beer is involved in the marketing and manufacture of 250 additional beer kinds.

Foster’s, Dos Equis, Desperados, Cruzcampo, Anchor, and Heineken are some of the brand names under which Heineken sells its goods. Heineken beer is offered in a variety of packaging options, including

Place in Marketing Mix Of Heineken

Heineken Beer began operations at an Amsterdam brewery and began exporting its goods to France within a few years. The firm has an international presence in almost one hundred and seventy countries, and a large majority of beer has been made in the Zoeterwoude plant in the Netherlands since 1975.

Heineken has integrated several beer brands from diverse nations such as Africa, China, and Mexico. Its products are freely accessible in twenty countries across Eastern Europe, the Middle East, and Africa.

It has subsidiaries in 10 nations in Western Europe and fourteen countries in the Asia-Pacific region. Heineken owns a majority stake in twenty breweries and has a joint venture in seven others around the United States. The brand has a significant distribution network that comprises services provided by merchants and wholesalers to customers via liquor stores, pubs, clubs, restaurants, and hotels.

Price in Marketing Mix Of Heineken

In 2014, Heineken’s revenues were estimated to be 19.257 billion euros, with a profit of 1.758 billion euros. To earn such sums, one must maintain an appropriate pricing approach. Heineken is a high-quality beer that is extremely popular in the beer consumer market.

For its products, the corporation has implemented a premium pricing approach. It has forecasted a value-based approach since high-end items will be more expensive.

Because its target clients are upper and upper-middle-class individuals, they are willing to spend a few additional dollars for high-quality items. For true beer enthusiasts, its variety appears acceptable and accessible, allowing the corporation to preserve its status quo of premium pricing and, as a result, produce larger sales.

Promotions in Marketing Mix Of Heineken

Heineken has a powerful marketing team that uses a variety of promotional tactics to sell its goods. It believes in making memorable ads that promote good brand recognition through electronic and print media. Advertisements are broadcast on major television channels, broadcast on radio, and shown in periodicals and on billboards.

Heineken has an active social media presence on Twitter, Facebook, and YouTube. Benicio del Toro and Daniel Craig are two well-known worldwide celebrities that have been affiliated with Heineken. Heineken has been linked to a variety of sports and events.

It was a sponsor of the Rugby World Cup and the UEFA Champions League. In 2016, it was the official beer of the Formula One World Championship.

Heineken has received various accolades, including the Medaille d’Or in 1875 in Paris, the Diplome d’Honneurs in 1883, the Grand Prix in 1889 in Paris, and the Hors Concours Membre du Jury in 1900 in Paris. Recently, in the year 2015, it received another award titled Creative Marketer of the Year.