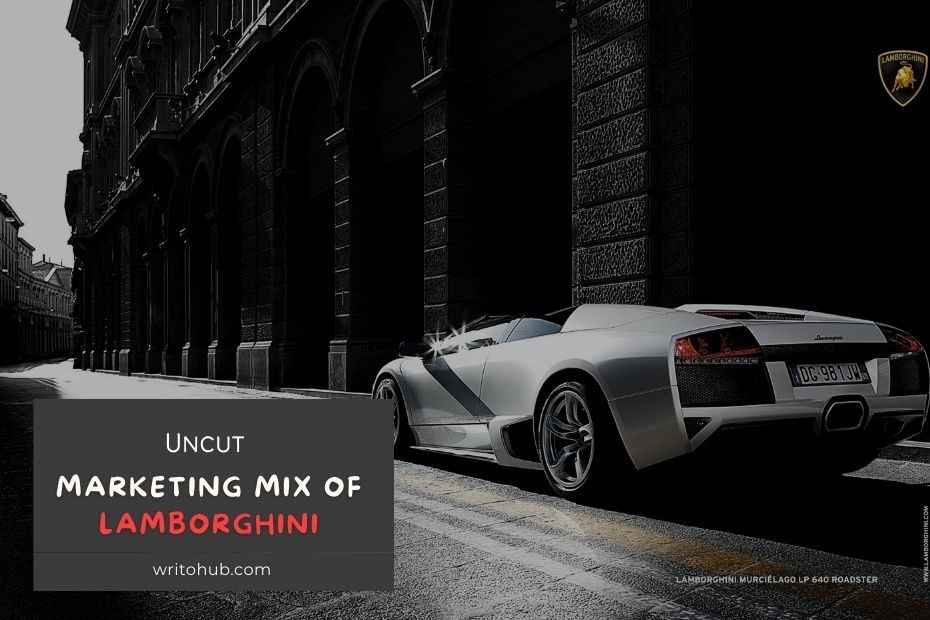 The Marketing Mix of Lamborghini tells the 4ps (Product, Price, Place, and Promotion) of the Italian multinational corporate manufacturer of luxury sports and SUV cars – Lamborghini!

Automobili Lamborghini S. p. A. is most commonly referred to as Lamborghini. It is a privately held company with Italian origins. The company is involved in the automobile business and specializes in the production of luxury vehicles.

It is currently a subsidiary of Audi, and its parent company, Volkswagen Group, owns it. With a global brand recall, Lamborghini sports vehicles are among the most popular and fastest in the world.

Let’s start with the Marketing Mix of Lamborghini to learn more about its product, price, promotion, and distribution approaches.

Product in The Marketing Mix of Lamborghini

Lamborghini is one of the world’s most well-known sports car brands. Lamborghini began when the company’s founder, after returning from World War II, started putting together tractors from spare parts he had on board.

The tractor business grew in popularity and became a profitable commercial endeavor almost immediately, giving the founder the confidence to branch out into the luxury automobile sector.

Lamborghini is an Italian premium supercar, sports vehicle, and SUV manufacturer with headquarters in Sant’Agata Bolognese.

Lamborghini entered the motorcycle market in the mid-1980s with the production of 1000cc sports motorcycles.

Lamborghini’s superior performance combined with its modern appearance and one of the most sophisticated braking systems makes it a popular option among automobile enthusiasts.

The Le Man’s variant of the Murcielago R-GT vehicle is the quickest Lamborghini ever built. It has a top speed of around 370 kilometers per hour.

Price in The Marketing Mix of Lamborghini

Lamborghini has targeted the upper-class portion of society as its target customers, who are both wealthy and affluent. Premium vehicles are produced by the corporation for people who demand higher performance and are willing to pay a high price for a product.

What counts to them is their desire to own a prestigious brand and be connected with it, regardless of the financial implications.

Lamborghini has a premium pricing policy for its high-end vehicles because it values customer loyalty and understands that being associated with its high-end brand is a source of pride for any consumer.

Lamborghini has reached new heights thanks to increased turnover and trading gains.

Place in The Marketing Mix of Lamborghini

Lamborghini caters to a worldwide market and has expanded its product offering to numerous nations across the world. Its headquarters are in the Italian city of Sant’Agata Bolognese.

The United States, Japan, Germany, Malaysia, Indonesia, India, and the United Kingdom are the main markets for Lamborghini automobiles.

Lamborghini has a highly skilled team dedicated to creating and designing the finest possible products. With the cooperation of manufacturers, an exclusive dealership network, and franchise agreements, the company has a strong distribution channel that aids in quick delivery.

The company has roughly twenty-three dealers in the United States, including Miami, Los Angeles, New York, and Chicago.

Promotions in The Marketing Mix of Lamborghini

Lamborghini is recognized for its unique logo, which portrays a roaring bull. The logo’s roots may be traced back to the fact that Lamborghini’s creator was a Taurus himself.

Lamborghini also provides rights to other companies to produce Lamborghini-branded consumer goods such as clothes, accessories, gadgets, bags, and computers. They are in the business of selling and promoting concept vehicles.

They’ve spent a lot of money in the past building concept automobiles, notably the 350GTV, which was the first one. The stitching job in these automobiles has always been done by women; males are not permitted to work in this division.

Lamborghini also features a two-story museum dedicated to the evolution, expansion, and history of Lamborghini automobiles over the years. They also have a variety of current and historical models on display.

The museum also serves to showcase significant moments in Lamborghini’s history. In Italy, the museum is immediately near the headquarters. There is a school specialized in teaching ice and snow driving to enthusiasts.

It’s called the Lamborghini Winter Academy, and it’s all about teaching people how to have a good time driving a Lamborghini vehicle in the stunning Alps Mountains.

Because of its tremendous popularity and dedicated client base, the company does not employ television ads or hoardings to promote its products. This is not a common commodity, thus it must be promoted through events, print advertising in school magazines, and other means.