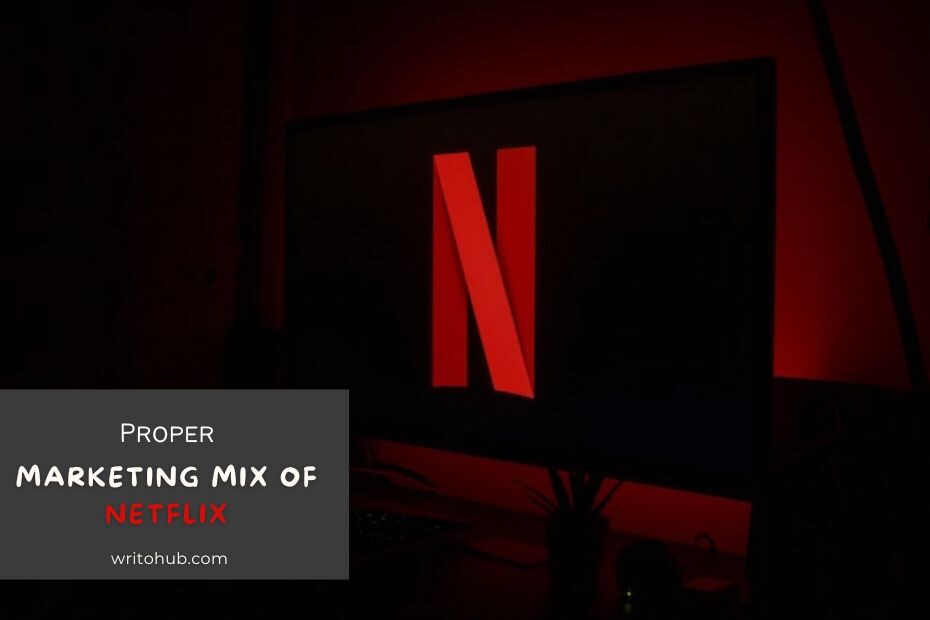 Netflix is the world’s largest entertainment and well-known OTT platform that has grabbed many hearts, especially during the Covid-19 pandemic. To attain tremendous success for a firm, it is necessary to employ unique business methods. Netflix has leveraged its product variety and distribution strategy in combination with appropriate and genuine advertising.

To their success, Netflix has introduced numerous methods of developing its marketing mix throughout the years to enhance sales and produce profits. Its competitors include Amazon Prime, Hotstar, HBO GO, and others, all of which have yet to match Netflix’s success.

Let’s start with the Marketing Mix of Netflix to learn more about its product, price, promotion, and distribution approaches.

Product in Marketing Mix of Netflix

Netflix, which began as a DVD rental service, is one of the world’s top online streaming media and entertainment companies. Netflix is now a website where you can sign up and pay to watch TV series, movies, documentaries, and other content. The best aspect of Netflix is that there are no commercials to interrupt your entertainment with the Content.

Netflix has established itself as a successful service provider since its start in 1999, thanks to its innovative selling concept. Users of Netflix get access to thousands of movies and television series that is updated daily to fulfill the needs of the customers.

It is kept up to date by being updated regularly. To use its services, you may first sample it for one month and then, if you like it or want to continue, you must take a monthly subscription. The best part is that you do not have any contract with them, no cancellation fees, and no commitment. You have the option to cancel your online subscription at any time.

If you want to subscribe to Netflix, there are three options available that provide varying amounts of content access to users: Basic Plan, Standard Plan, and Premium Plan.

As part of its marketing mix product range, it also provides streaming software for quickly viewing any video, however certain internet speed and system requirements are required for a better experience.

Netflix started to develop films and TV episodes a few years ago, and some of its creations include Orange is the New Black, Thirteen Reasons Why, Narcos, and others. By securing broadcasting rights, it also serves as an internet distributor.

In addition to all of this, it offers DVD rental delivery. The brand guarantees that its platform is constantly updated with new information. While Netflix attracted a large number of viewers during the pandemic, the company’s growth is being stifled by competing OTT services.

Price in Marketing Mix of Netflix

The higher-cost subscription has access to more features than the succeeding lower-priced subscription, a technique that enables the company to gain more profits by luring customers to join higher-paid subscriptions with numerous tempting features. The brand’s price choices include the tagline “Choose the Plan That’s Right for You.”

Netflix’s prices are reasonable, which is consistent with the company’s mission statement, which seeks to subsidize customer renting costs. You will receive additional advantages based on the plan you have chosen.

Place in Marketing Mix of Netflix

Netflix features a mail-in DVD service in which the DVD is shipped directly to the client’s house; this is done through a direct distribution route, so the product flows directly from the producer, i.e. Netflix, to the customer.

Online streaming services rely on multichannel distribution, which occurs when a company has more than two channels through which to reach out to clients (“Multi-Channel/Hybrid Distribution Systems.”).

Netflix has had multichannel distribution since the service became accessible on multiple platforms such as Playstation in 2008, Xbox in 2009, and Nintendo Wii in 2010, all of which Netflix distributes.

Netflix is a hybrid channel, which means that the product or service is not directly provided by it. It originates from production companies, as Netflix obtains a license to utilize their films, which are subsequently distributed to users “Distribution Systems: Multi-Channel”.

Promotions in Marketing Mix of Netflix

When it comes to a brand’s marketing mix, promotion is the most crucial component. Netflix has been consistently marketing and advertising its services in various ways as part of its promotion plan.

To begin, the primary source of their advertising is social media websites such as YouTube, which draws youngsters as well as a variety of adults. However, while continuing to advertise on media websites, they also turned to personal marketing videos in 2006, allowing them to be more creative in their promotion of the business.

It also takes the use of social media platforms such as Facebook and Twitter. In the offline mode, they deploy commercial billboards. TV commercials and print advertisements also assist Netflix in promoting the many episodes, current movies, and so on that customers may see through the app. Netflix has also partnered with telecom operators in several countries to offer it as part of their plans.

Because they are already a worldwide recognized brand, there is no need for intensive promotion, thus they are now relying on pop-up advertisements, banners, hoardings, and other static ads on websites.

Over the past several years, to better advertise their products, they have employed high-ranking celebrities in their marketing films to enhance sales and profits.

Overall, with their web advertising, they have consistently referred to their free trial for a month to entice clients and familiarise them by allowing them to experience the service for the first time on a trial basis.

Over the years, Netflix has designed multiple advertisements to match different seasons or events, which has helped them improve their sales and viewership during the most popular periods of the year.

In 2013, Netflix developed a winter campaign to promote their service and illustrate how Netflix has a variety of genres for family programming for the holidays.