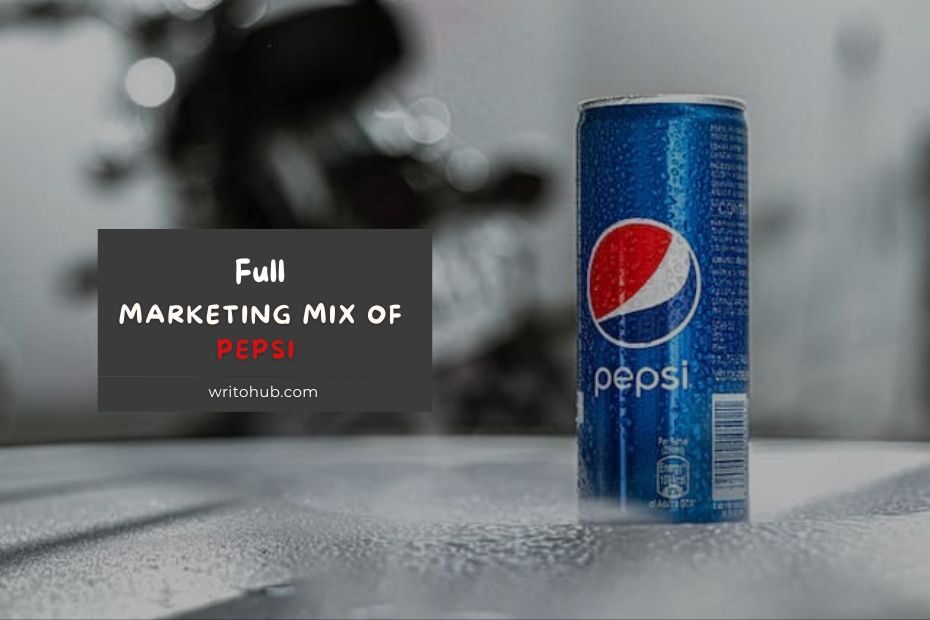 Pepsi is one of the foremost companies in the world that deals with the Food and Beverage sector. Pepsi is available in more than 200+ nations and territories throughout the world.

In 1965, Donald Kendall, the CEO of Pepsi-Cola, and Herman Lay, the CEO of Frito-Lay, established PepsiCo. Over time, the business has grown and established itself in the market.

Pepsi, the world’s second-largest soft drink company, has employed several innovative techniques in the previous decade to increase its turnover and earnings.

Pepsico’s development into snack brands such as Quaker oats, Cheetos, Lays, and kurkure has given them a competitive advantage against Coca-Cola.

Let’s start with the Marketing Mix of Pepsi to learn more about its product, price, promotion, and distribution approaches.

Product in the Marketing Mix of Pepsi

Pepsi cold drink is the corporation Pepsi Co’s primary product, which is Carbonated Soft Drinks. Pepsi is the most popular beverage in this category.

Pepsi’s marketing mix consists mostly of carbonated beverages, as well as fruit juices, snacks, and other items. Aside from Pepsi, other soft drinks include 7up and Mountain Dew.

The corporation has also moved into the sectors of chips and wafers such as Lays, Cheetos, and Kurkure, all of which cater to different demographics.

Within these items, they offer a wide range of products such as Diet Pepsi and 7Up Revive, to mention a few.

Quaker oats, a recent addition, are likewise becoming more popular. As a result, the company’s bottom line benefits from the turnover generated by food products.

Price in the Marketing Mix of Pepsi

The price in the Pepsi marketing mix is get decided based on proper research of the company’s beverages, snacks, and other products.

Pepsi competes in a sector controlled by two giants known as Coca-Cola and Pepsi. As a result, Pepsi’s price is competitive. In a battle between Coca-Cola and Pepsi, neither brand can prevail if they engage in a pricing war. This is due to the high cost of manufacturing and shipping. As a result, these firms are more inclined to engage in a brand war than a pricing war.

Pepsi is well-known for offering promotional discounts as well as discounts for bulk purchases. As the container capacity increases, so do the discounts for customers. As a result, a 2-liter bottle of Pepsi will be less expensive per 100ml than a 250-ml pack.

In addition, based on the order size and payment type, the company offers a considerable discount to its distributors. If a distributor orders a large amount and the payment method is also acceptable to the firm, they are given a substantial discount, which keeps them motivated.

Pepsi’s profit margin from distributors is strong, but the corporation must lower its pricing for some well-known bulk purchasers and retailers. For example, Indian merchants such as Big Bazaar, Dmart, and Reliance Fresh are bulk customers of the company since they buy in quantity and sell at a discount, resulting in massive sales.

Similarly, certain well-known restaurant franchises, such as KFC and McDonald’s, are large customers of the firm.

Because they buy and sell in bulk, these stores, and food chain brands bargain with the company for a lower price. Although companies get a higher margin from distributors and a lower profit from bulk buyers, companies prefer to provide goods to bulk buyers since they order larger quantities of goods than distributors.

Place in the Marketing Mix of Pepsi

Pepsi and its products are sold in over 200 countries throughout the world. The locations where Pepsi goods are offered are mostly in regions where the intended clients can be found.

The CSD may be found all over the place. The distribution strategy of Pepsi’s marketing mix is centered on distributor partnerships and a global network of grocery shops, retailers, supermarkets, and restaurants.

Pepsi products are widely available to the public. The same goes for chips such as Lays and Kurkure, which are desired by all types of individuals and serve as a substitute for the meals they eat.

Tropicana is only accessible in a few locations since they cater to a certain demographic. Lipton also provided a certain type of consumer base, therefore they are only available at certain shops. These establishments are primarily supermarkets or retailers frequented by the targeted clients.

Promotions in the Marketing Mix of Pepsi

Promotions are one of the most important reasons Pepsi maintains its brand image. Pepsi primarily targets young people through a variety of Brand Ambassadors. In India, brand ambassadors have included the country’s finest personalities and athletes, such as Amitabh Bacchan, Ranbir Kapoor, Sachin Tendulkar, MS Dhoni, and others.

Pepsi promotes itself through all media outlets. Pepsi is also involved in BTL marketing in addition to ATL. Pepsi also employs trade marketing and sales promotions at the point of purchase in addition to regular advertising channels.

Discounts and packaging are constantly packaged to provide the optimum combination and value to the client to encourage sales and brand equity.

Kurkure is known to target family snacking and the middle-aged population, whereas Lays is known to target children and the party atmosphere. As a sports drink, Gatorade only targets athletes. And, in comparison to the other goods, Quaker oats focuses on breakfast with a dash of masala.

The bottom line is that Pepsi cannot survive without effective marketing. This is due to the fact that Pepsi is in the FMCG industry, and in FMCG, you either perform or perish.

The FMCG sector is one of the most difficult for organizations to enter. Pepsi, on the other hand, is not just surviving, but prospering in the FMCG market. As a result, I’m hopeful that Pepsi continues to reinvent its marketing mix to maintain its position in the top two soft drink category.

I hope you have gathered all the crucial information about the Marketing Mix of Pepsi and the 4 P’s of Pepsi. Stay tuned for more Marketing Mix Articles.