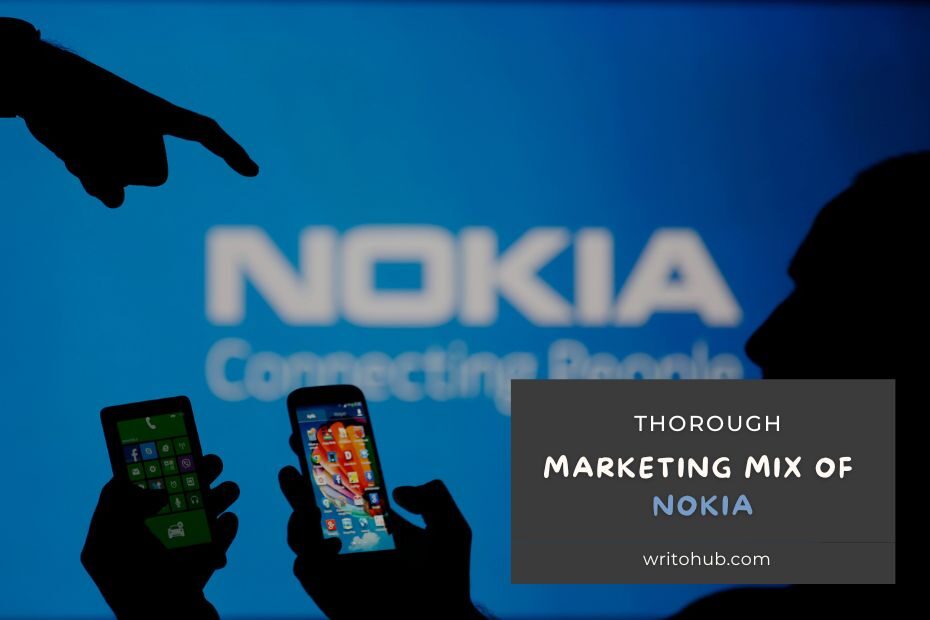 Nokia is recognized as one of India’s leading cell phone manufacturers. Its success in this field is based on a variety of factors, one of which is its approach to executing the marketing mix.

This approach has allowed them to develop a strategic vision for their product. In the same way, this company has put a lot of effort into making sure that its marketing plan based on this strategy is a success.

Nokia used to be the second most popular phone manufacturer in terms of volume behind Samsung, with a global market share as high as 18 percent at one point, however, fell to a considerably lower level when other competitor brands entered the market.

In the year 1994, Nokia, a Finnish business, joined the Indian market. On a Nokia device known as the Nokia 2110, the first-ever GSM call was made.

Let’s start with the Marketing Mix of Nokia to learn more about its product, price, promotion, and distribution approaches.

Product in The Marketing Mix of Nokia

Nokia is a well-known consumer electronics and telecommunications equipment firm that was once the unchallenged mobile phone brand. Because of their competence in manufacturing phones and handsets for individuals from many walks of life, Nokia’s products were known to vary greatly.

They started with feature phones and then expanded into the smartphone industry with the Lumia line as part of their marketing mix product strategy series. Nokia Asha was one of the most popular selling phones in India, especially among the lower classes.

Nokia is largely noted for the high quality and long-lasting nature of its products. It was one of the few businesses to make phones with cameras and maps. Apart from its expertise in developing phones, Nokia was also recognized for producing tablets and mobile PCs.

Its mapping service, as well as navigation and music functions, were well-liked by individuals from all walks of life. Nokia invented the first mobile phone with an antenna, the first smartphone with a built-in camera, and the first phone with SMS capabilities.

Price in The Marketing Mix of Nokia

This is the second marketing mix element that Nokia has adopted in India. Essentially, Nokia sets cost anything between Rs. 1200 to Rs. 50000. As a result, regardless of your budget, there is something for everyone.

Nokia phones are designed to appeal to individuals from all walks of life, regardless of their financial position.

Nokia has also specialized in providing consumers with monetary allowances. This is perfect for individuals who like buying phones regularly because they will benefit from such discounts from time to time.

Their price-skimming approach is also critical in guaranteeing that clients buy their items at various times after they’ve been presented to the market. This is because the prices are first set high but subsequently decrease over time.

Place in The Marketing Mix of Nokia

Nokia has also ensured that connections with various retailers around the country have been developed to guarantee that customers have simple access to the phones of their choosing.

Essentially, Nokia is collaborating with a variety of small and medium-sized businesses (SMBs) in the phone and electrical products supply industries to assist them in marketing their products and earning a fee based on the number of sales made.

Nokia has been able to establish itself in the Indian market and enjoy consistent support from a wide spectrum of people who use mobile phones as a result of this.

All of their achievements may be attributed to their ability to effectively apply the Marketing Mix.

Promotions in The Marketing Mix of Nokia

Nokia has spent money on advertising to ensure that its products reach its target market. They take advantage of all available channels to keep potential consumers up to date on any developments involving their phones.

In their promotional campaigns, they employ electronic media, print media, social media, billboards, and other types of conventional marketing.

High customer satisfaction also offers them an advantage since it stimulates word-of-mouth marketing to other customers who are still indecisive about which handset to buy.

They also make it a point to hold road shows in various towns and cities regularly to keep clients informed about any new developments involving their products.

I hope you have gathered all the required information about the Marketing Mix of Nokia and the 4 P’s of Nokia. Stay tuned for more Marketing Mix Articles.