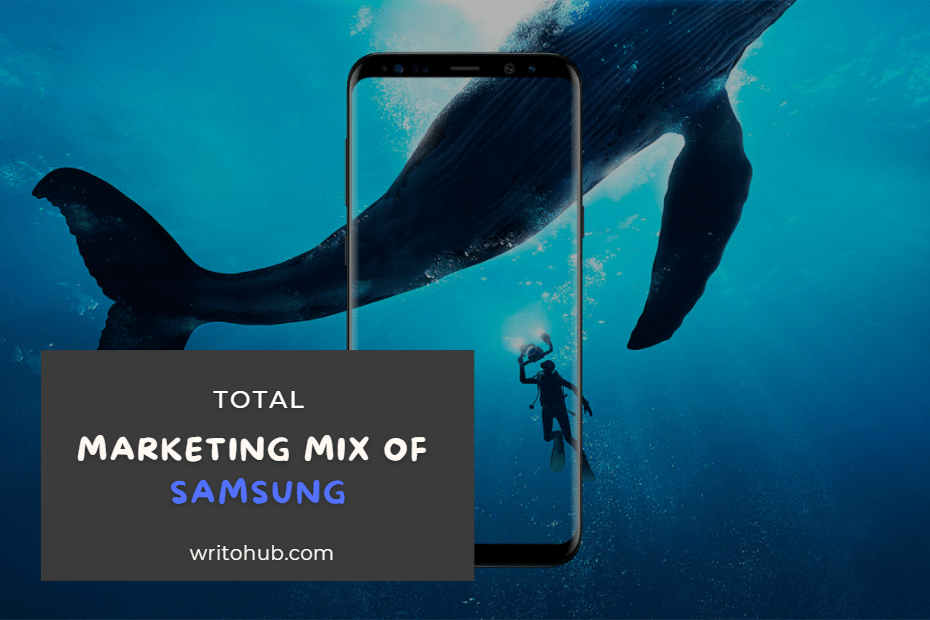 The Samsung Group is a global South Korean corporation based in Seoul’s Samsung Town. It is a multinational corporate conglomerate that comprises numerous connected enterprises, the majority of which are united under the Samsung name.

Lee Byung-Chul established Samsung in 1938. They began as a trade concern and have since expanded into textiles, food production, insurance, and other areas. Samsung entered the electronics sector in the late 1960s and has been steadily growing since!

Let’s start with the Marketing Mix of Samsung to learn more about its product, price, promotion, and distribution approaches.

Products in The Marketing Mix of Samsung

Samsung spends a lot of money on research and development to ensure that its consumers get the finest products possible. Samsung provides a diverse range of products in a variety of areas. Samsung marketing mix products provide a wide range of services.

There are five categories in which the items can be classified:

Price in The Marketing Mix of Samsung

Samsung is the industry leader in mobile phones and a major participant in the home appliance and smartphone markets. It employs two pricing structures, which are described below.

Samsung’s marketing strategy includes a competitive pricing approach. Samsung has not been able to establish itself as the market leader in other product categories. Even in the ‘home appliances’ category, Samsung is a reliable brand.

Samsung must employ competitive pricing to avoid flanking attacks from its market competitors. Samsung is also not a market leader in these product categories, thus it must protect its market position.

All of this aids in comprehending Samsung’s price strategy in the marketing mix. Samsung has a price-skimming strategy as well.

For example, when Samsung introduces new products with various storage capacity options, the price of the device rises. When other competitors release a smartphone with equal characteristics, Samsung reduces the price and easily avoids losing market share as a result of the competitor’s launch.

Place in The Marketing Mix of Samsung

Samsung is present in the market through a variety of methods. It operates based on a three-part channel marketing strategy. Dealers in sales and service, modern retail, and distributors.

Samsung’s sales and service dealers are in charge of critical accounts and corporate sales. These dealers may also open Samsung showrooms that are exclusive to them.

Large retailers like Croma, Hypercity, Vijay Sales, Vivek’s, and others who operate in the modern electronic retail chain are included in the modern retail section.

Because Samsung is such a well-known brand, shops are obligated to provide it as an alternate or primary product to their customers.

This distributor has made a significant investment in Samsung, the distributor and the corporation work together to sell Samsung’s products. As a result, Samsung’s whole product line will be sold to a single distributor, who will then sell it to retailers.

Promotions in The Marketing Mix of Samsung

Samsung advertises in a variety of ways. Samsung, as a firm, believes in attracting customers through advertising while also employing aggressive techniques to push products to customers through sales incentives.

On the one hand, Samsung employs a variety of marketing vehicles throughout the year, both during the festive season and outside of it. On the other hand, it provides several incentives and discounts to its business partners to encourage them to sell Samsung above the competition.

As a result of this approach, Samsung’s brand is growing, and both the pull and push methods are working at Samsung at the same time.

The marketing mix of Samsung is a lesson to marketers on several points. First, having multiple products at the same time can help your business expand since each of these products may become an income generator. Second, while the Pull technique is more costly, it is significantly more advantageous in the long run.