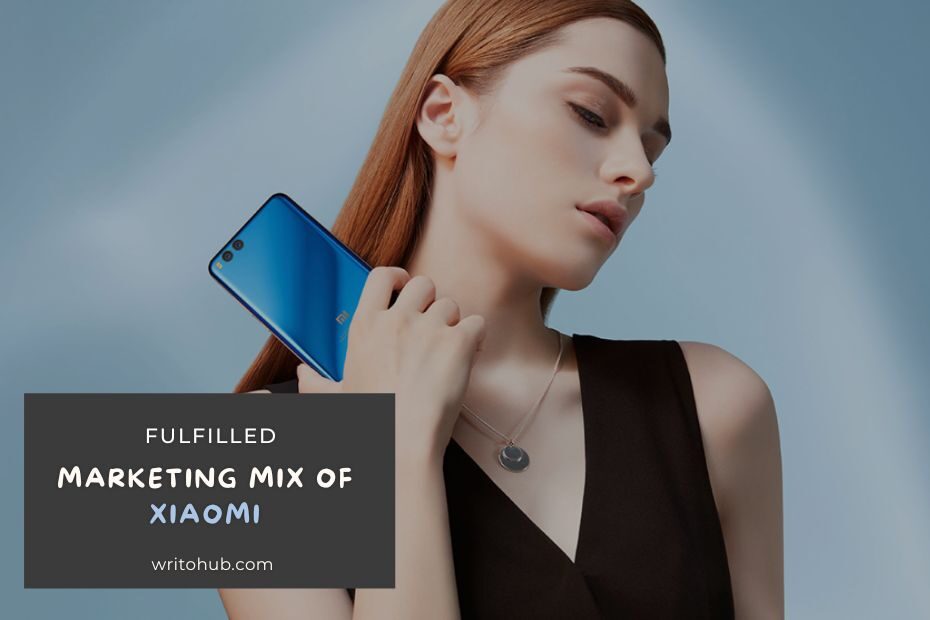 The Marketing Mix of Xiaomi tells the 4ps (Product, Price, Place, and Promotion) of the Chinese multinational technology company – Xiaomi!

Xiaomi is a Chinese electronics design and manufacturing firm that is privately held. Founded in 2010 by Lei Jun, the business is headquartered in Beijing and ranks fourth among the world’s leading smartphone manufacturers.

Its consumer gadgets and computer gear are among China’s most popular. Xiaomi’s rapid growth concerns Samsung and Apple since the business is on the verge of overtaking Samsung and Apple as China’s leading smartphone manufacturers.

Xiaomi is quickly growing, with operations in more than 30 countries. According to IDC, Xiaomi was the world’s third-biggest smartphone manufacturer and China’s top smartphone sales.

According to its current value, it is also one of the top seven tech start-ups in the world. Xiaomi has a unique idea in which it makes product improvements based on customer input.

This has enabled it to reach clients in ways that other businesses have not been able to, and it is on the verge of becoming a worldwide brand.

Let’s start with the Marketing Mix of Xiaomi to learn more about its product, price, promotion, and distribution approaches.

Product in The Marketing Mix of Xiaomi

Xiaomi’s smartphones, including the MI, RedMi, and POCO brands, are the company’s best-selling items. Due to a legal issue pending with Ericsson over the use of non-Qualcomm products in India, these items are generally operated on Qualcomm CPUs.

Similarly, it has adapted its products to the needs of the regions in which it works, taking into account the local market and political situation. This shows Xiaomi’s strong product portfolio in its marketing mix approach.

In 2018, the firm was listed on the Hong Kong Stock Exchange.

Price in the Marketing Mix of Xiaomi

Xiaomi provides high-quality products at a reasonable price. According to the company’s founder, chairman, and CEO, the company’s primary goal is to sell items at the same price at which they are manufactured, with no profit margin.

As a result, Xiaomi aims to sell low now and profit tomorrow. The accessories, software, and services that are to be utilized with their goods are where they are focusing their profit-creation efforts.

This is a one-of-a-kind price approach in the company’s marketing mix, with the primary goal of capturing a significant market share. Xiaomi’s price approach has allowed the company to enter and dominate a global market. To get into the market, they first began with low-cost feature phones.

Xiaomi has progressively established itself as a major smartphone player throughout the world.

Place in The Marketing Mix of Xiaomi

Xiaomi is a Chinese corporation that caters to a global market. However, it has a large basis in China, which is its homeland. Currently, the firm is gaining traction in 11 other nations.

Turkey, Malaysia, Mexico, Thailand, the Philippines, Russia, Singapore, Indonesia, Brazil, India, and Vietnam are among them, with the majority of the nations being in the BRIC and Southeast Asia areas.

Despite its efforts to expand internationally, Xiaomi’s primary focus is in China, where it already has a large user base.

Xiaomi’s sales are primarily conducted online rather than in physical stores. As a result, both the manufacturer and the consumer benefit from the situation.

Customers may access items without having to pay the distributor, wholesaler, or retailer, saving the company a lot of money on shop construction and management.

Promotion in The Marketing Mix of Xiaomi

They’ve made a name for themselves by attracting a large fanbase for their operating system. “Just For Fans,” Xiaomi’s one-of-a-kind project in which Xiaomi’s ardent fans guide the product’s development at every stage.

The majority of Xiaomi’s workers are former devoted customers who have joined the product development team. In this approach, Xiaomi has ensured that its products have a pull strategy rather than a push strategy.

Xiaomi also made extensive use of social media and word-of-mouth marketing.

Microblogging sites and social networking sites such as Facebook and Twitter were used to promote it. They hold flash deals frequently, forcing customers to buy because of the urgency.

This created a buzz around the goods, with some reports claiming that some of the items were sold out in just 6 minutes. Xiaomi’s sales increased as a result of this attention. Xiaomi’s social media strategy also includes running Weibo profiles for each product line in China, as well as Facebook accounts in other areas.

Xiaomi also hosts fan festivals and local gatherings regularly, similar to how Harley Davidson does, to cultivate a cult following for its products.

Fans are also urged to bring their friends to these events. They also team up with like-minded businesses to market their products, as they did with Uber to promote their brand. Flipkart, being one of the most popular online marketplaces, aided Xiaomi’s public relations efforts. Xiaomi’s VIP Users Center features a well-established program.

As a Xiaomi VIP, you earn points for each new purchase, which you can use to improve your standing in the Xiaomi online community and obtain discounts on future purchases. Local meetups and fan events are also open to these VIP members.